It is one of the perverse delights of the Progressive BigGov Left that we are living more and more in a sue-happy, litigating society. By activist judges not upholding basic rights of refusal and association, businesses and individuals are needlessly dragged into court and frivolous new decisions end up as yet more legal tentacles, invading and strangling everyone’s basic liberties. In days of yore, if one party refused to do business with another and was dragged into court, a sensible judge would say, “Take your business (and your money) elsewhere.” End of story. Next case.

No longer. The Left has now officially joined the legalized extortion business. Naturally, their rationale is “humanitarian.”

The original genius of the Constitution was to enumerate a few basic, God-given rights and to leave as much of life as possible up to individuals operating in the free marketplace of commerce and ideas, the courts reserved for genuinely serious disputes: concrete violations of one’s individual life, liberty and pursuit of property or happiness. Now, thanks to the mania for new “rights” demanded by the Left, the freedom of two parties to do or not to do business or associate by mutual agreement is under increasing attack. Surprise! A uninvited third party called The Government/The State now gets to stick its nose in and interfere with our personal freedoms.

A Christian bakery declines to bake a wedding cake for a gay couple. They are sued. On the basis of the 2014 Obama Era Supreme Court  legalization of gay marriage, activist judges rule in favor of the plaintiffs; the bakery is driven out of business. Politically Correct orthodoxy rules the day, not Constitutional principles of free speech, free association, religious freedom.

A young Trump fan wants a birthday cake paying tribute to Donald Trump. All bakeries approached decline, so the boy’s mother makes the cake. No lawsuit, no ruined businesses. In today’s contentious climate, mom’s effort is easier than wasting her time to find a friendly baker. And though unkind, even hurtful, it’s the right of the bakeries to refuse.

Sadly, that observance of Constitutional rights is a one-way street these days. Any uproar on behalf of the little Trump fan from the same quarters vociferously calling for legal action against the Christian baker? Of course not. Aside from the blatant hypocrisy and selective outrage always at work in this sort of politically motivated litigation, today’s easily wounded Leftists and Progressives would undoubtedly claim that that the boy has no legal basis for a lawsuit. And, most likely, there wasn’t really one in the case of the gay wedding cake. Did the Christian baker violate the gay couple’s legal right to get married? Or can it be construed to be a violation of civil rights, comparable to a restaurant refusing service to someone on the basis of race, religion, sexual orientation, whatever? Legal decisions can always go either way, always a 50-50 chance of losing or winning. On the other hand, bolstered by overweening Supreme Court rulings like gay marriage, the Leftist is emboldened to assert legal rights for reparations, no matter how petty. Always follow the power.

This is what happens when you have an “activist,” politicized judiciary so sought after by the Left. The carefully limited and delineated God-given rights (like life, liberty, pursuit of happiness, private property, ownership) acknowledged in our founding documents can be expanded whimsically by political activists to anything considered   hurtful, unpopular, even unpleasant.

You hurt my feelings and made me feel “unsafe.” See you in court! 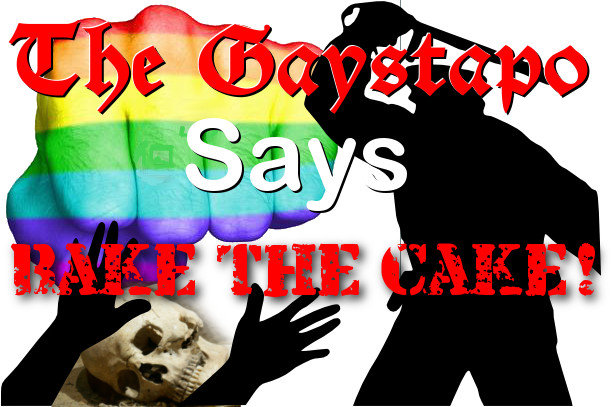