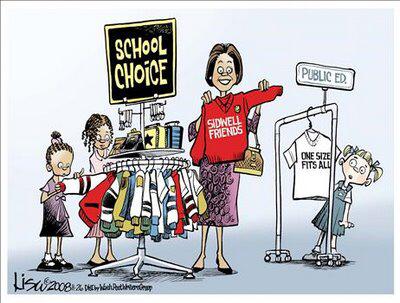 Betsy DeVos, a champion of education vouchers for parents dissatisfied with the public schools, should be viewed universally as an answer to those parents’ prayers. Instead, even the mother of a disabled child who stands to benefit directly from federal vouchers issued for home schooling and charter schools is against DeVos. Why? Stock Big Gov answer: because the money should go to improve the public schools. Throw that good money after bad!  Always a wise policy! Never mind that untold billions are poured into the public schools, tens of thousands are earmarked for each child; and, mystery of mystery, many of these “publicly educated” children don’t even have textbooks or desks. Not to mention assurance of not being beaten up or seeing their teachers assaulted by other students. Remember that way-cool feelgood publicity coup staged by Facebook’s Zuckerberg on Oprah? $100 million! To the Newark public schools! And…results? Zilch.

Somewhere in between the Federal Piggy Bank and Dick & Jane, the money invariably goes “elsewhere.” Like into the pockets of bureaucrats and unions (it’s really ALL about Teachers Unions) and “advocates” and focus study groups and local politicians…and…somewhere other than where it’s supposed to go for educating a child.

If the mother of that disabled child wasn’t wed to the notion that it’s someone else’s job to provide her child’s education, just as she doubtless thinks everything else should come from the U.S. Treasury, she would jump at the chance for any money to home school her child or pay someone else to do it or, better yet, get together with like-minded parents and start her own charter school. Granted, even charter schools are not the answer if parents are not involved and political correctness displaces the basic 3 R’s, the treasures of our Western civilization and genuine intellectual inquiry. If you want oversight, Madam, appoint yourself the overseer. Or take your chances with the status quo and watch those billions disappear into the usual black holes of the bureaucratic universe.

When newly inaugurated President Trump said it was a new age of returning power from the Fed to the people, it means just that…which also means returning the responsibility for the life granted to you. All this may come as a shock to many who think that this election was about new, easier ways to be baby-sat and subsidized.