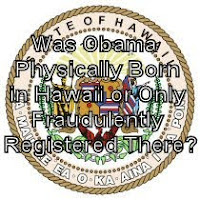 The issue of Obama’s birth certificate is only one part of what may prove to be the most dazzling scam ever perpetrated upon the American people. Aside from the pure fascination and scandal of it all, Obama’s presidency and all Socialist legislation including ObamaCare could be nullified in the process. God bless this age of the internet allowing the free flow of information and instant communication. Objective truth, plain facts, are to the Radical Left what daylight is to a vampire.

Part One and Part Two of Doug and Joseph Hagmann’s investigative report at CanadaFreePress.

YouTube video essay on the Constitutional qualifications for being U.S. President.

Detailed Catalogue of Evidence compiled by NJ attorney Mario Apuzzo at his blog.

More on the fraud that is the Barack Obama successfully peddled to America.

5 Replies to “Obama: Natural born American citizen or not?”