Obama shamelessly denies Lech Walesa the honor of accepting a Medal of Freedom on behalf of another heroic Pole? Cat’s out of the bag? Toothpaste’s out of the tube? What’s it take to stop denying that Barack Obama is a committed socialist/communist/leftist? Digging into the past, it’s not so hard to understand his radical roots. No wonder a powerful, historically monumental, living champion of freedom like Lech Walesa runs diametrically counter to one Chicago operator’s plans for “transforming America.” As Ronald Reagan is quoted in Rory Cooper’s National Review article, Walesa has a history of fearful little tyrant bullies trying to turn him into a non-person. He’ll survive handily as the unforgettable hero he is while one tiresome  community organizer will find posterity to be less than kind.

They don’t make them better than these two. 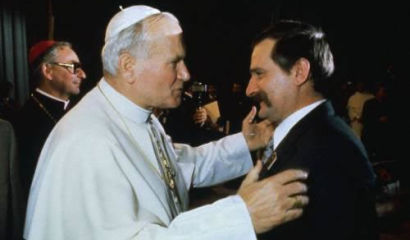