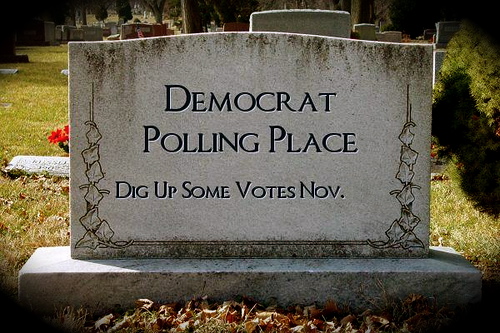 On January 10th, Project Veritas reporters walked into New Hampshire Polling Locations during the Presidential Primaries, saying dead people’s names. We stated the name of a dead person we got from the NH obituaries. The names of the deceased were both Registered Republican and Democrats And in almost every case, saying a dead person’s name, we were handed a ballot to cast a vote. We used no misrepresentation and no false pretenses. in fact, in almost every case, we insisted we show ID and they insisted that we vote without showing ID. Thanks to DailyCaller.com for breaking story.

MSM story says O’Keefe sting “purports” showing voter fraud. Note paragraph pointing out that he videoed secretly and without permission [gasp!], yet another way the Left exploits the vagaries of “legal” and “illegal” to get away with murder.

Shock & surprise: it’s everywhere, in this case South Carolina. Another tribute to the virtues of government-run bureaucracies and their foolproof immunity against fraud & corruption.