The mind reels at the WH propaganda machine at work here: Anyone who’s ever held and fired any firearm has to be chuckling. Our First Defender of the Second Amendment holds the gun like a pampered prince just handed a broom and told to sweep the floor for the first time in his life. The picture is great for a laugh, but its true value is recognizing it as a product of Barack’s unabashed propaganda machine at full spin:

“This official White House photograph is being made available only for publication by news organizations and/or for personal use printing by the subject(s) of the photograph. The photograph may not be manipulated in any way and may not be used in commercial or political materials, advertisements, emails, products, promotions that in any way suggests approval or endorsement of the President, the First Family, or the White House.”

Wouldn’t dream of disobeying this edict. Warning! Thou shalt not photo-shop this transparently fake photo of Our Beloved Leader “shooting skeet” at an angle no feathered [or is it furry?] skeet has ever flown [or do they lope?] In exchange for not “suggesting approval or endorsement” of Little Big Sureshot, how about a little peek at a past vastly more questionable than a lie about shooting skeet “all the time?”

Thankfully, a refreshingly American response to our would-be censors thrives: 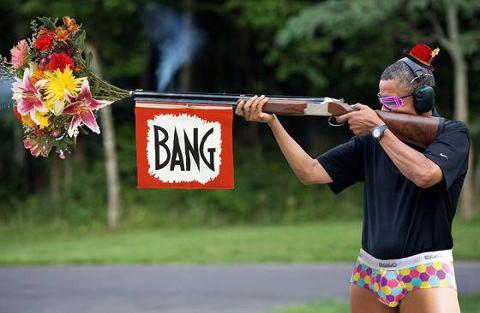 A really delightful amalgam of Alinsky’s Rules for Radicals: #4-6:

4. Make the enemy live up to their own book of rules.

5. Ridicule is man’s most potent weapon.

6. A good tactic is one your people enjoy.

One thinks back to this….

…and this totally believable shot of  the Chinese Jack LaLanne, better known as Chairman Mao, swimming 15 kilometers [9 miles] in a hour…

…First you see him, then you don’t…Trotsky disappears from Lenin’s side at 2nd annual celebration of the Glorious Revolution…

…and expect more of  this:

One Reply to “You can fool some of the people…”