…until you do a background check on the celebrated gun monsters of recent times making the Left squeal like hysterical little girls. It’s a safe bet that there’s some additional profile info on all those notable young gentlemen making Chicago’s “gun-free” zones such nice family destinations.

Understandably, some might  take umbrage at video narrator Wild Bill’s classification of Liberals as mentally ill, particularly those who call themselves “Liberals,” and it’s never been this writer’s intention to offend anyone. However, if a Liberal insists that

1) I not be allowed to protect myself against criminals;

2)my hard-earned money and property belong not to me but are subject to the whims of “the collective” and “the common good”;

3)unduly cold/hot/stormy/unpleasant weather is caused by free market capitalism and therefore another reason to turn over my life & liberty to some Higher Authority looking very much like a Big Government, Soviet-style bureaucracy;

4)my healthcare choices are the concern of the very same Big Brother Bureaucracy and none of my damn business….

One could go on, but let the point be made: if Liberalism/Leftism with its goals of enslavement and loss of freedom for millions of people who don’t want their help is not madness, one must re-define “madness”…which is precisely what the Left routinely does. Such leftist distortion of reality is best described by George Orwell as NewSpeak.

Liberals choose to be controlled, owned, dependent on and totally beholden to The State. The rest of us choose to live as free, independent individuals. To each his own. Live and let live. And may the rational free souls amongst us have the last laugh…and don’t expect us to subsidize your madness. 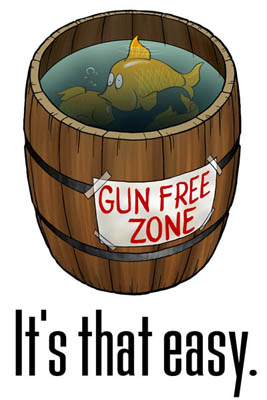 One Reply to “Rightwing “gun culture” seems to be such a menace….”