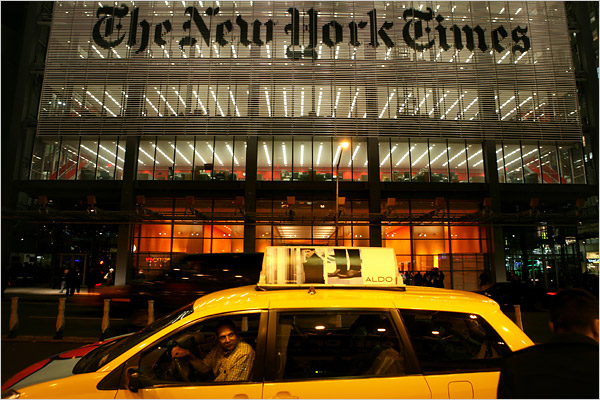 In a June 26 editorial entitled ‘Responsible Use of Eminent Domain,’ the New York Times displays what can only be described as the ultimate in hypocritical chutzpah as it attempts to justify its own nefarious land—grab made under the guise of the principle of eminent domain.

A Supreme Court decision last year on eminent domain caused many people to overreact, most of all Congress. The House of Representatives passed a troubling bill that would severely limit local governments’ ability to clean up blighted areas and promote responsible development. The Senate, which has yet to act, should take a more moderate approach.

Stanley Kurtz hit an Organizing for America nerve during Barack Obama’s campaign for president. Stanley, a Harvard-educated social anthropologist, is a senior fellow at the Ethics and Public Policy Center and has written for National Review and National Review Online for over a decade. When he started not only asking questions but digging into Barack Obama’s academic and activist past, the campaign tried to shut him down — literally, organizing a phone slamdown on Chicago radio.

END_OF_DOCUMENT_TOKEN_TO_BE_REPLACED
Posted on October 26, 2010 By: Fred

The Juan Williams/NPR flap isn’t going away — and shouldn’t. Basically, Williams was fired for not toeing the party line at NPR. A number of observers, including Williams himself, are protesting the hypocrisy of NPR not dismissing the likes of Nina Totenberg for wishing AIDS upon the family of the late Jesse Helms. Of course, that’s no surprise. Totenberg’s hate speech doesn’t qualify as hate speech in the liberal lexicon. Totenberg toes the party line at NPR. She’s a good apparatchik, safe among the party hierarchy.

Last week, National Public Radio CEO Vivian Schiller took a break from her crusade for a government takeover of the media to swat a fly. With now-former NPR analyst Juan Williams suitably splattered across the evening news after politically incorrect comments he made on Fox News, Schiller can return to her real passion – the creation of a national network to ensure that in the future, you get your news from the government in general and NPR in particular.

END_OF_DOCUMENT_TOKEN_TO_BE_REPLACED
Posted on September 10, 2010 By: Fred

Where did Barack Obama acquire the self-evident disdain he has for major corporations, especially oil companies, and for the striving classes who have made America prosperous and strong? Many conservatives have noted Barack Obama’s class envy, expressed both in his and his bride’s resentment over their education debts and desire to live large in the White House, and in his intent, expressed to Joe the Plumber, to “spread the wealth around.”