UPDATE 10/21/22: We live in an upside-down world in which evil runs rampant and just retribution for it is treated as a crime. This runs counter to healthy human nature, a mass suppression of common sense.  Do we dare be optimistic and believe the positive predictions of good government’s recovery…along with the common sense that underpins it?

UPDATE 10/20/22: Contrary to our traditional image of them, the Brits apparently are not well disposed toward common sense in economic matters. Liz Truss, calling for tax cuts that are always guaranteed to stimulate business, is now out after only 6 weeks. Whatever legitimate beefs her critics may have with her, one is inclined to believe that formerly-Great Britain has turned herself into a permanently wandering ship without a rudder or a captain to right her course. Margaret Thatcher, where are you?

UPDATE 10/22/22: The emboldened Left no longer hides its intention to push  any mad agenda that sets people against one another making them ripe for control and conquest. Who nowadays can’t report a “former friend” or, for that matter, estrangement from family? 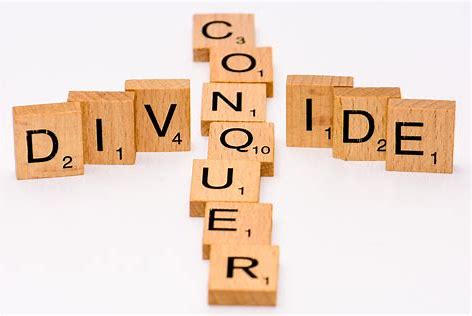 10/17/22: The only consistency in Dem/Left propaganda is its projection of  guilt onto Repub/conservative opponents. Claims of a stolen election dominated the airwaves in 2016 without any evidence (“Russia hacked the election!!”) while the 2020 Election is deemed “legitimate” despite hard evidence to the contrary. We know Hillary paid Russian operatives for the utterly fake “Russian dossier” that was designed expressly to discredit Trump throughout his Presidency. At least projection is a pattern that unerringly pinpoints and exposes their specific criminality.

UPDATE 10/16/22: We’re “election deniers.” We’re “Covid deniers” and “anti-vaxxers.” Except little by little, the truth will come out about the blatant manipulation of Election, 2020, proving that BrandonWorld has been an historic miscarriage of justice. Unlike the aforementioned accusations routinely coming our way from the usual scoundrels, our accusations have factual evidence upon which they are based, not just a devious strategy of shutting up people unwilling to be silenced by lies.

UPDATE 10/22/22: J6 has been a golden showcase for Trump-haters in general but for wannabe celebs hungry for pity and attention, it’s been a once-in-a-lifetime opportunity. No one has exploited the mendacious J6 narrative more than one cop named Michael Fanone who got roughed up that day and suddenly qualified as a darling and drinking pal of such Trump-hating celebs as Joan Baez. 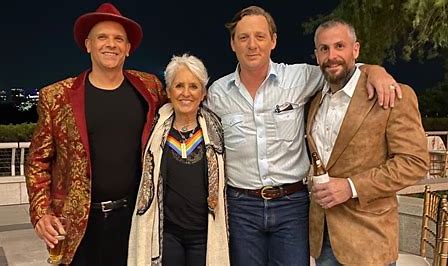 At the time, he claimed to almost be beaten to death and still persists in spreading the lie about fellow cops “murdered” that day. America’s most famous folk-singing avatar of non-violence should have dug a little deeper into Fanone’s decidedly violent, bullying past as a nasty cop harassing a perfectly innocent Black lawyer from Howard University named Michael Maddox in 2009. Read all about it even though Fanone’s 15 minutes ran out long ago, and it’s seriously doubtful if Joan and her pacifist pals are still returning his phone calls.

UPDATE 10/20/22: Fauci’s cold-blooded treachery is a story that must be told until the truth sinks in. Rand Paul leads the pack in seeing this evil exposed and justice done. What a task. 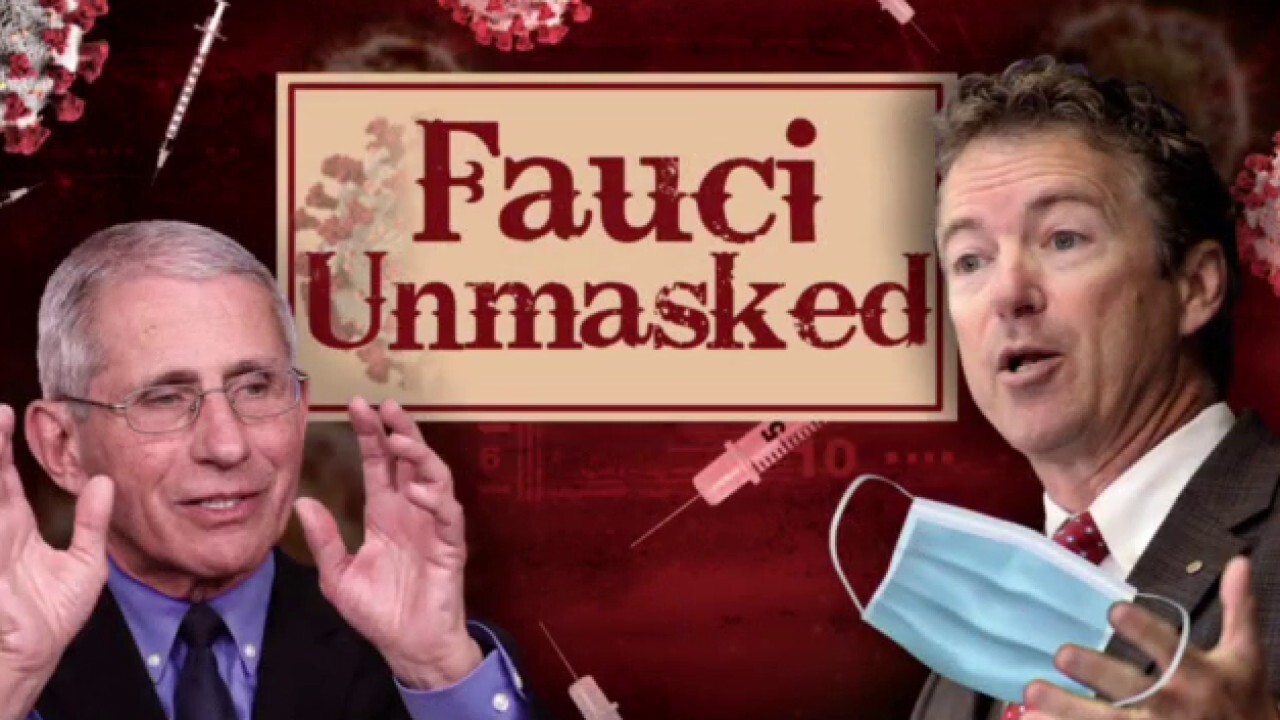 10/18/22: Under the guise of science and philanthropy, we have been witness to THE crime of modern times. Connect the crony capitalist dots between BigPharma and BigGov represented by Anthony Fauci, stretching from Covid back to AIDS. RFK, Jr.’s published expose on the diabolical “good doctor” is now an eye-opening, shocking video documentary. Currently at no cost, watch Part I of RFK, Jr.’s THE REAL ANTHONY FAUCI. 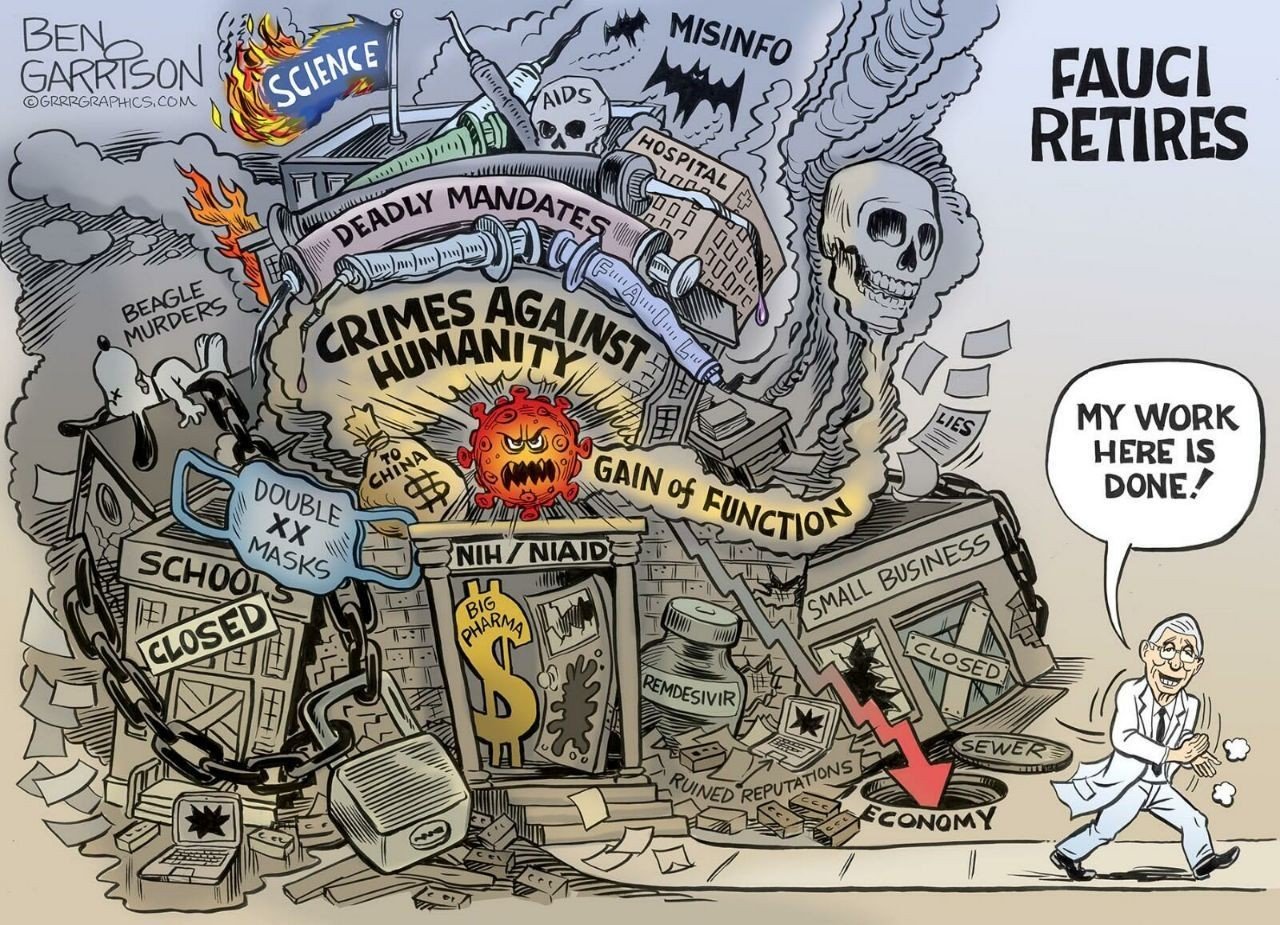 UPDATE 10/16/22: Here are 77 ways Covid response was an insane travesty. Undoubtedly there are more than 77, but going no further than the first two will be enough for those looking back at this era to wonder “Whatever happened to the free world in the 21st century?”

UPDATE 10/22/22: Vax madness persists, but, happily, not as fanatically across the nation as it was. It remains a weaponized policy for BrandonWorld, which has declared that all American children must be jabbed to attend school. Admirably, a slew of Republican governors have declared a ban on such mandates while all other states except Newsom’s People’s Republic of California and Washington DC have (so far) set NO policy. As one governor stated, this should be in our rearview mirror, but for those Democrats eager to be American dictators, there’s no letting go and moving on. 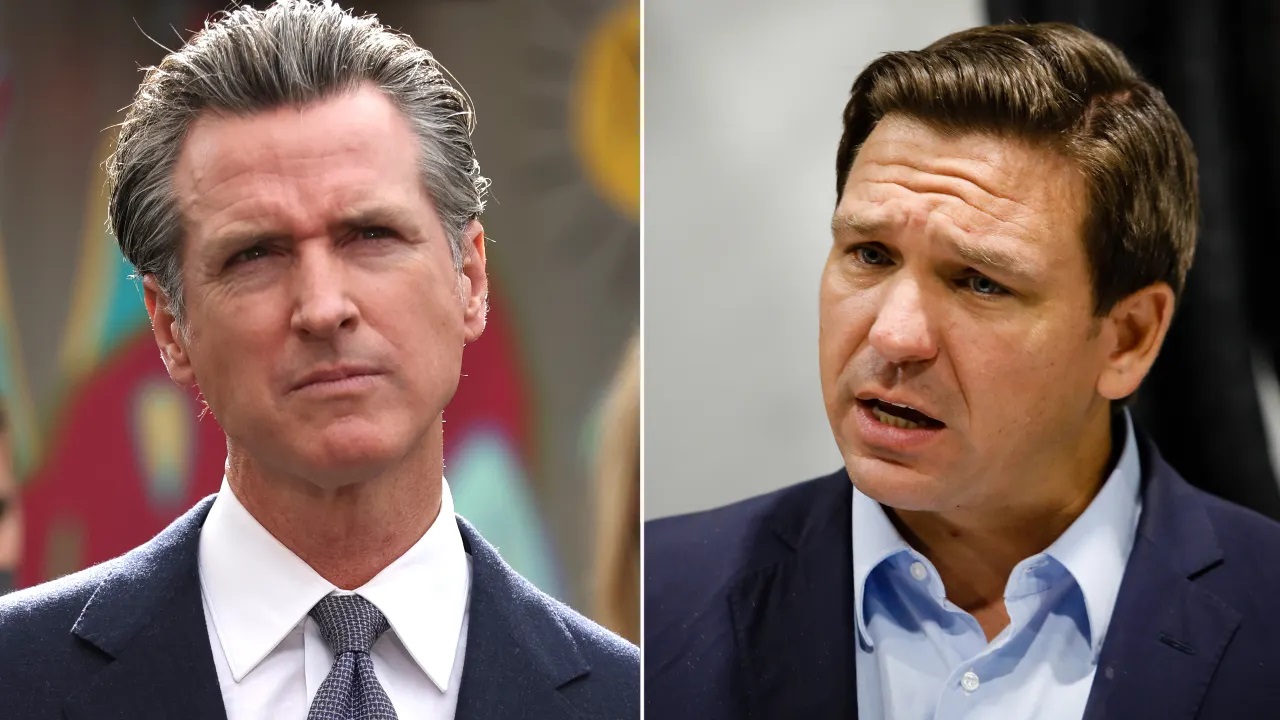 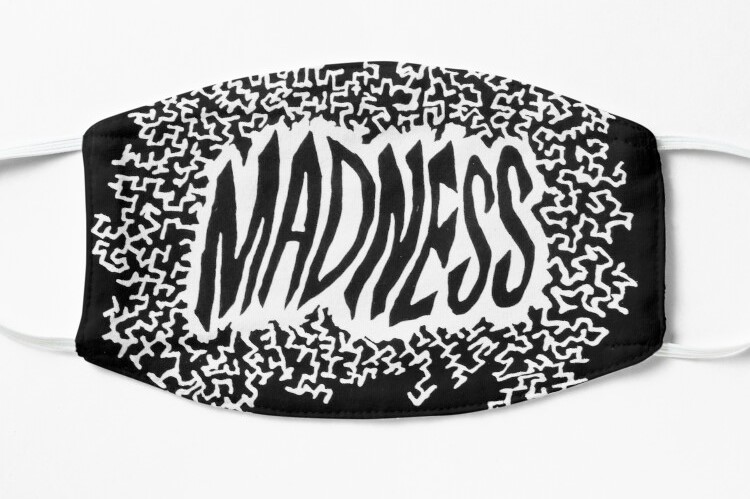 UPDATE 10/20/22: One must wade through a lot of sensational, hysterical stuff these days, but the active suppression of cheap, alternative treatments for Covid rings totally true. Hiding behind fake concerns for human health, the alliance of BigGov/BigPharma/Big Bucks (Gates/Zuckerberg) knows a huge power/money grab when it sees it. Just one more chilling aspect of RFK, Jr.’s THE REAL ANTHONY FAUCI. 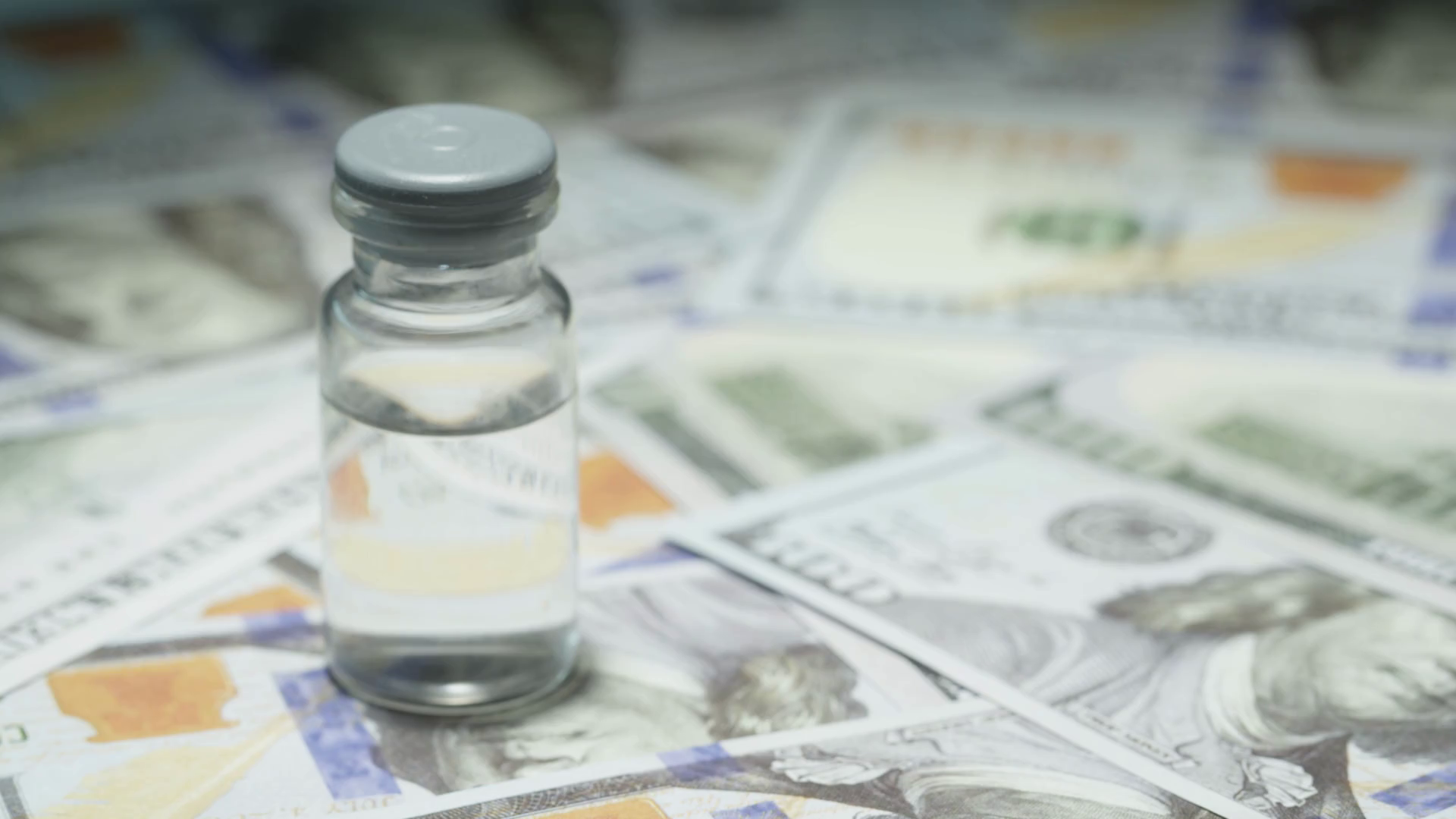 UPDATE 10/16/22: Biden’s Day One cancelation of our energy independence has been nothing but a gift to Putin, canceling out whatever virtue the Fool-in-Chief may claim to deserve for supporting the Ukrainians. Like Obama said in a most uncomplimentary way about Joe…but then, what is Joe at all other than a puppet for the Man (Men) Behind The Curtain? 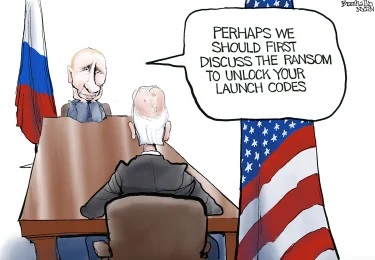 UPDATE 10/17/22: The crimes of both Mrs. Bill Clinton and Fauci somehow remain unpunished, and our sense of a just world is deeply corrupted in the process. 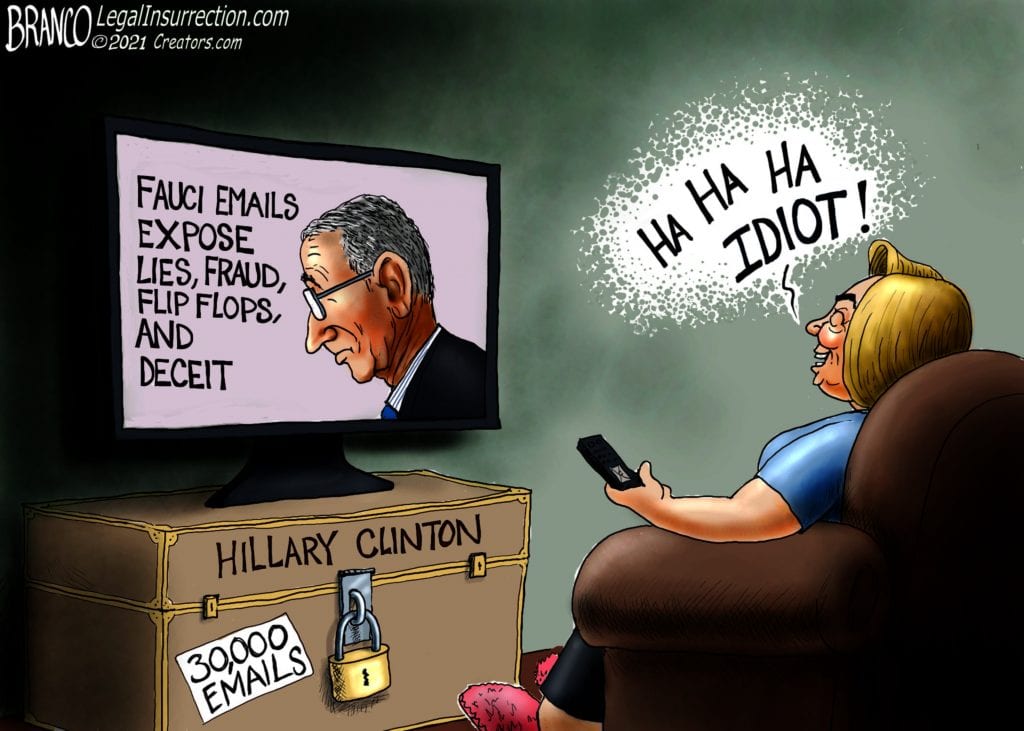 UPDATE 10/15/22: The increasing frequency of children being given gender transition counseling, hormones, even surgery, sometimes WITHOUT parental consent or knowledge, is without exaggeration an epidemic that must be exposed and discontinued. Otherwise, those pushing this insane barbarity will attain their goal of dismantling our entire civilization and the basic tenets on which it has been based for the better part of the last millennium. Mercifully, as this horror gains exposure, Americans are overwhelmingly lining up against it. 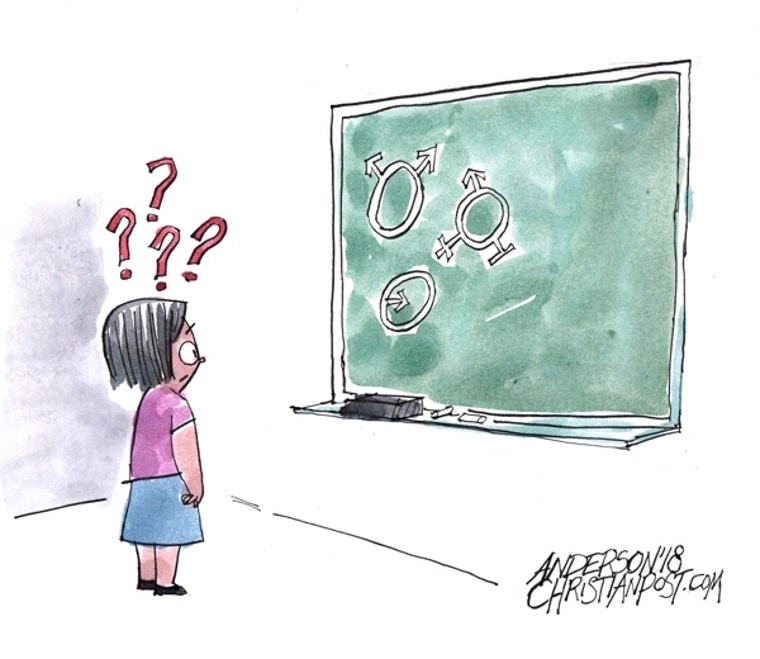 UPDATE 10/21/22: Apres QEII, le deluge? Whatever flaws there may have been in Liz Truss’ agenda to take Britain back to the free market, it’s looking suspiciously like she has been kneecapped by the WEF/Globalists. “See?” they’re saying. “The free market/conservative approach isn’t the way to go. Follow our beneficent centralized, One World blueprint!” It’s a dangerous lie, and jaded pessimists fear the British public will swallow it and stupidly return to the great, good-hearted ways of Labor.

UPDATE 10/15/22: Don’t be fooled by the “non-violent” nature of totalitarianism in America unlike Soviet Russia, China, Cuba, North Korea, East German... What we are suffering is still coercion and force that leads to the same horrific place of submission and silence. It CAN happen here. In fact, it already is.

UPDATE 10/21/22: At what point do loyal Dems stop pretending they didn’t vote in gas shortages and all the costly inconveniences that go with Joe’s cancellation of oil/gas production? Don’t they realize they look as demented and corrupt as the Big Guy creep they call their leader? 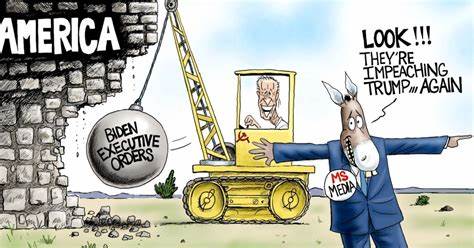 UPDATE 10/20/22: Green Energy. The Gender Spectrum. The long and short of this destructive re-engineering of society is MONEY. Follow it, and suddenly all the claimed benefits to society burst like the gassy bubbles they are. That doesn’t guarantee that the public has the nerve to admit the lie and to act on sending it to the garbage heap. The real crisis and cause for serious worry is the intentional suppression of gas/oil production based on the whole phony Armgageddon scenario painted about “Climate Change!”

UPDATE 10/21/22: Anyone who doesn’t understand the mortal dangers of crony capitalism only needs to follow the money/power trail of Big Gov/BigPharma’s alliance in the Covid fiasco. Watch RFK, Jr.’s THE REAL ANTHONY FAUCI.

UPDATE 10/17/22: With no help from our present American government, the Iranian uprising continues with such determination that one is tempted to hope they will really overthrow the Mullah tyrants. What is truly revolutionary is the possibility of widespread eradication of Sharia and an emerging movement of moderate, civilized Mohammedanism. 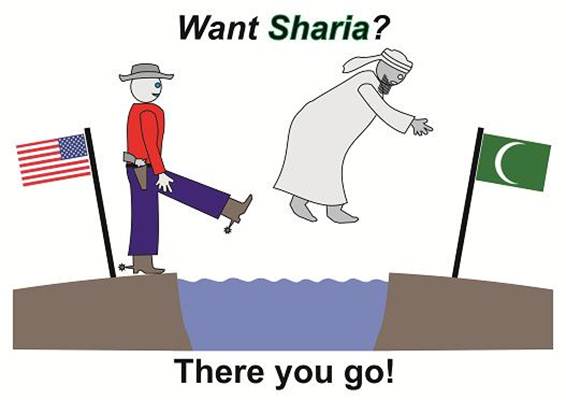 UPDATE 10/17/22: It’s always helpful when the Dems blame the Repubs for their disasters since it’s admitting THEIR personally created disasters  are a problem. If only they could blame someone else… which they always do. The Open Border is no exception. 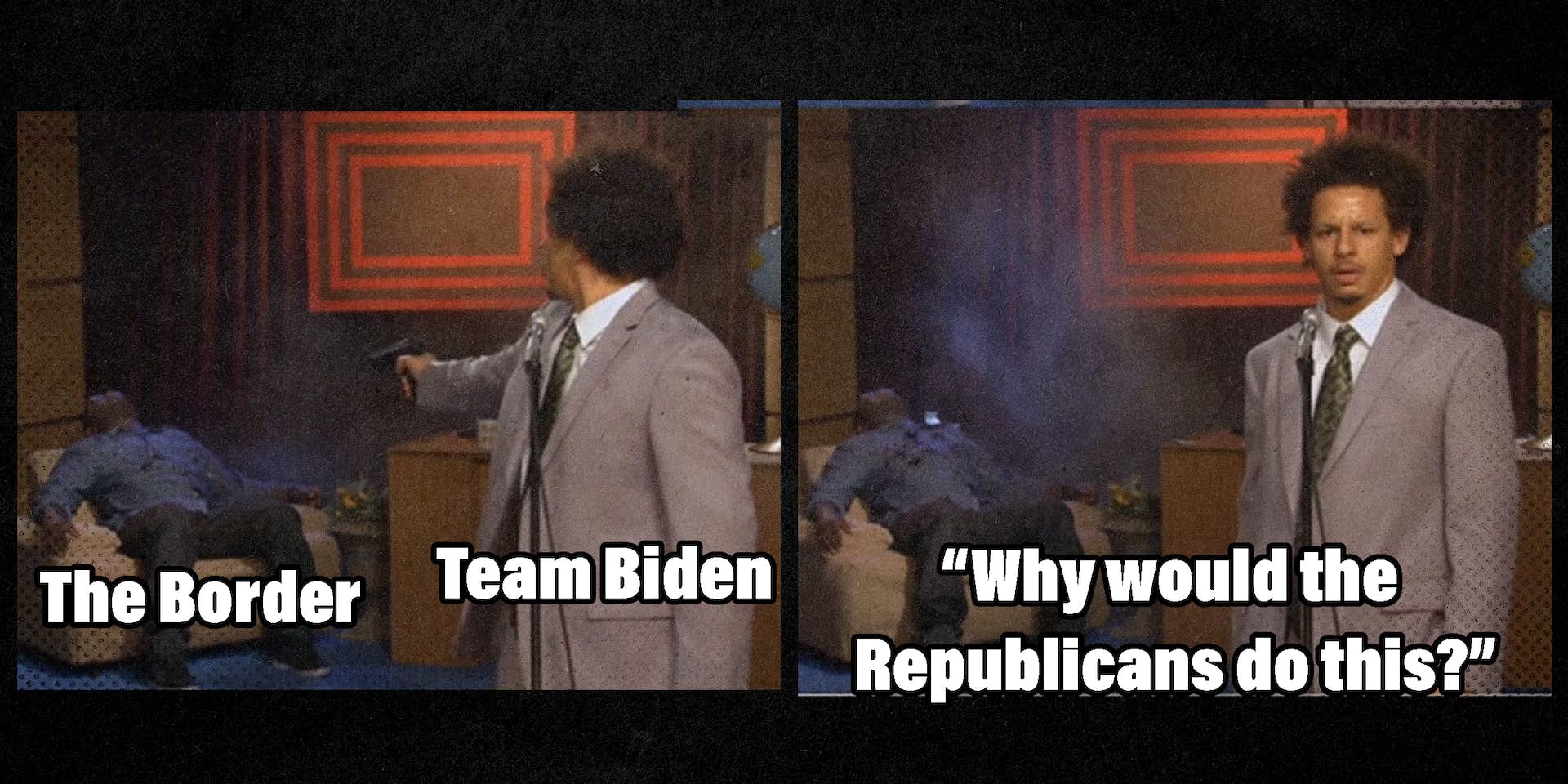 UPDATE 10/16/22: Trump says it out loud and plain to clueless American Jewry: wake up and recognize your friends and discard your enemies. The predictable reaction has been yet one more bit of upside/down/backwards fake reports of his “rightwing anti-semitism.” 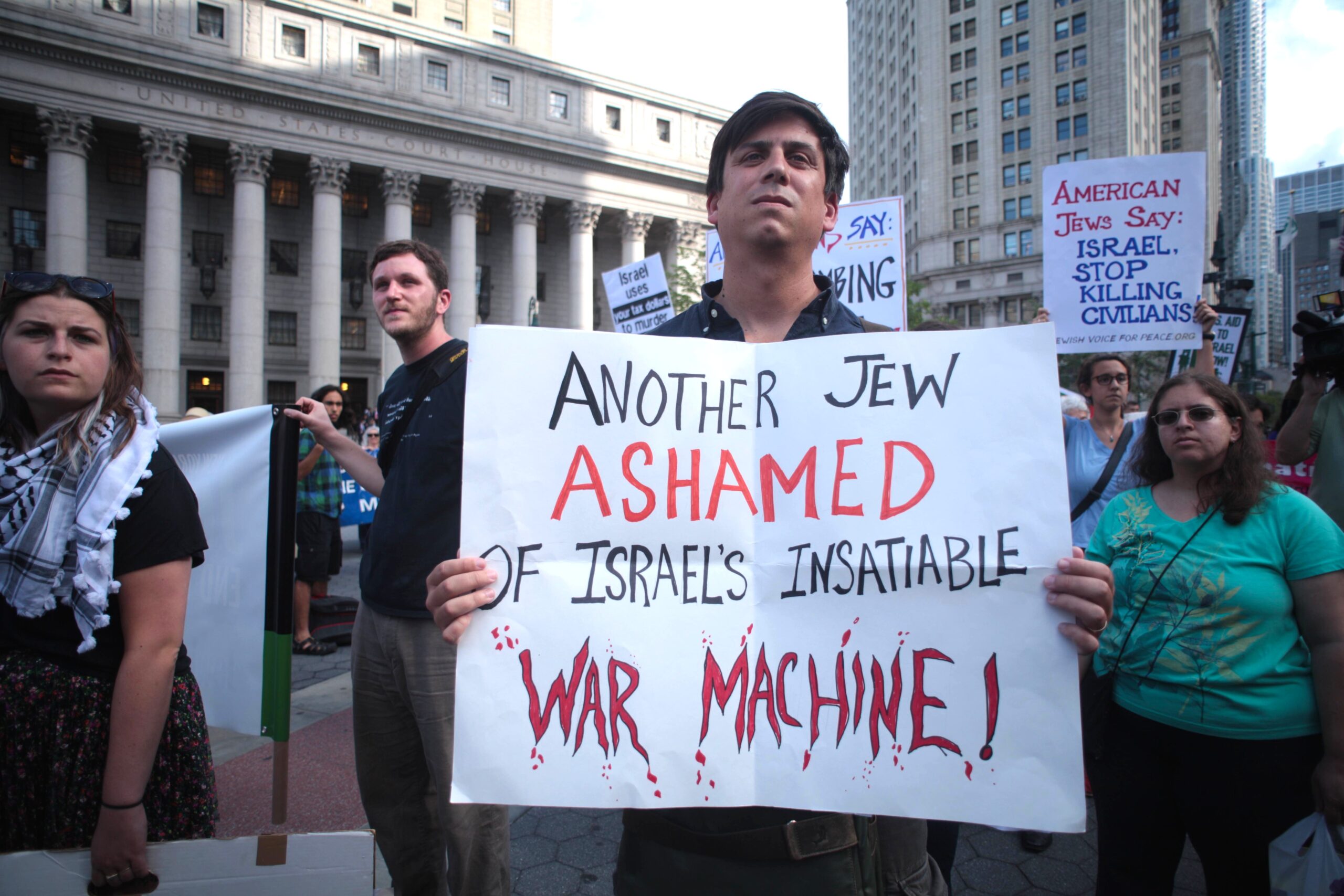 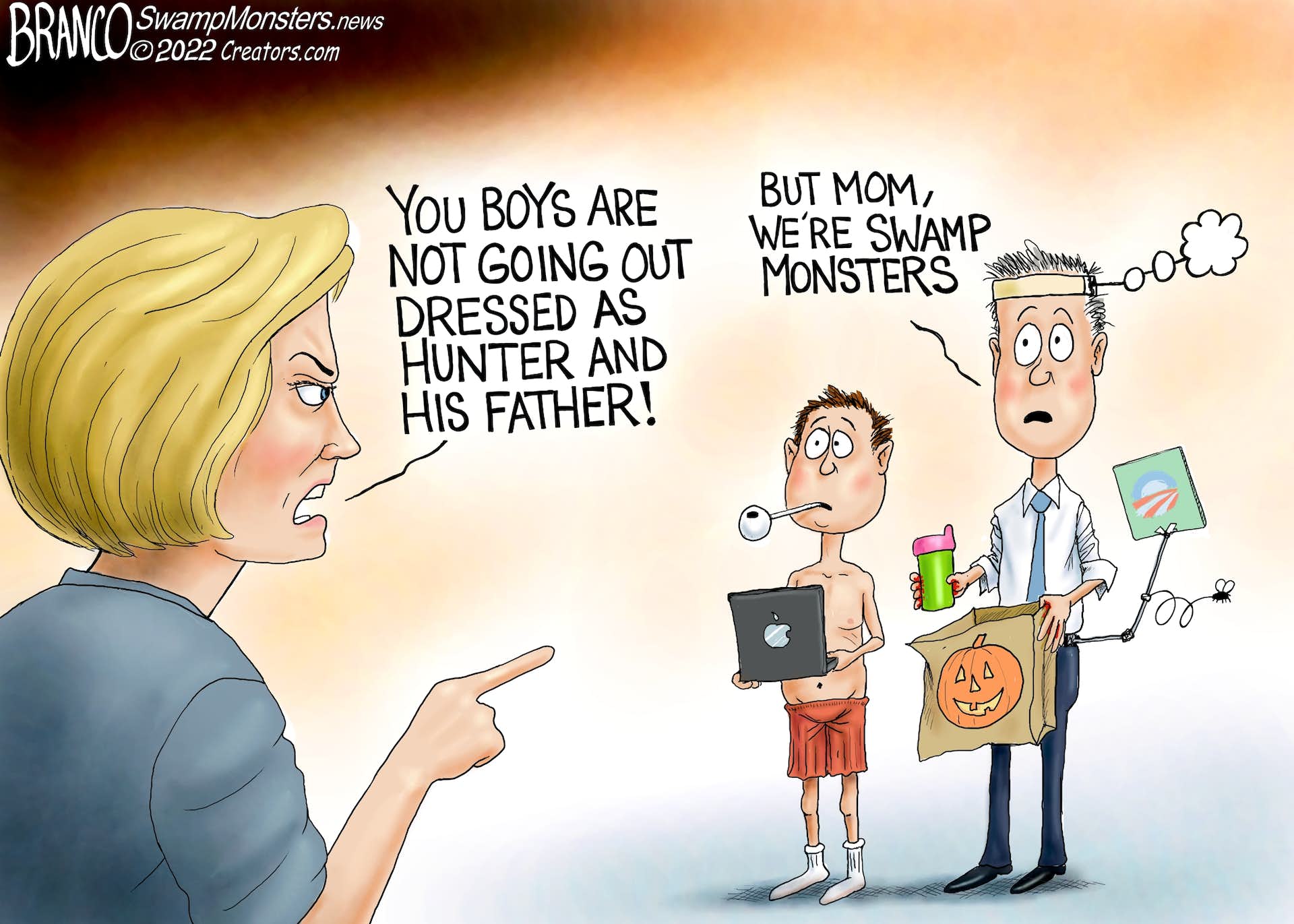 UPDATE 10/20/22: We’re not going to see justice in the Hunter/Biden Crime Family exposure. The FBI is too deeply enmeshed in the whole cover-up of all Biden Crime Family shenanigans as the laughable exoneration of the central Russian dossier operative indicates. Like the Clintons, those currently at the top are there at the pleasure of the Swamp, and right now, BrandonWorld must be protected at all costs.

UPDATE 10/16/22: The media and doubtless millions of fools are entranced by the eating habits of their POTUS which has included his ice cream cones and, now, quesadillas!! Since his wife has portrayed those South Of The Border types as “breakfast tacos” (see below at 7/13/22 ), the recent food junket may be just one more tribute to those breakfast tacos who vote. And, to be inclusive, by all means let those two-legged, brown-skinned quesadillas vote too!

UPDATE 10/16/22: Blindly loyal Democrats have no problem with the Creep-in-Chief and his fantasized obsession with young girls and a hypothetical 30 year old man, namely himself years back when he was taking nude showers with his pre-teen daughter. This week it was creeping on a young girl in Irvine CA.

Not mysteriously, thanks to his media lapdogs fully in the know about what these very public, available videos reveal, many YouTube entries are “unavailable.” And, like his obvious dementia, never a topic of discussion.

Anyone meeting the public regularly has lines, responses and routines that by necessity get repeated with different encounters. This is one routine that could very easily stand replacing, but this is a fundamentally unattractive personality who has always fancied himself The Big Guy and, now as a fully realized dirty old  man, feels entitled to let his freak flag fly freely. Naturally, everyone is expected to like it, but the reality is that it’s way past time for the glue factory. This is not cute or endearing.

10/18/22: At the center of RFK, Jr.’s THE REAL ANTHONY FAUCI stands the BigGov figure of Anthony Fauci, the avuncular “good doctor” front man for this deadly fraud going back as far as the parallel AIDS/AZT days of the 1980s. Watch and connect the dots.

UPDATE 10/17/22: The One has great advice for his fellow Dems: don’t do any of the things I did if you want to win voter support. ID politics? Cancel culture? Trump Derangement Syndrome? Don’t do it, saith Sorta God who got us on this hellish road that we have to get off or go down for good. 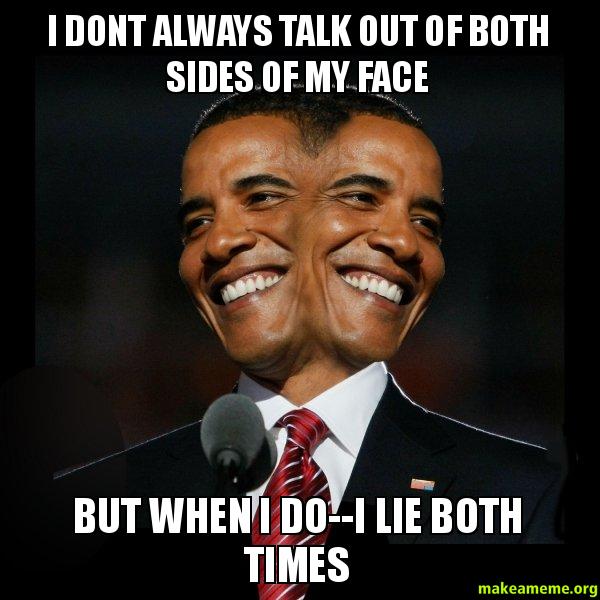 UPDATE 10/22/22: RINOs as embodied in McConnell are just as dangerous to our personal liberties and national health as the Democrats from which they have become almost indistinguishable. 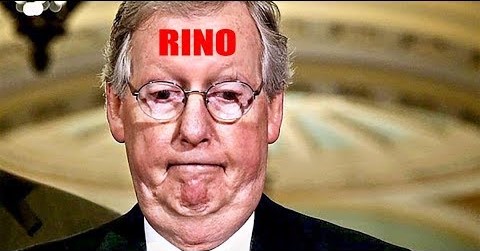