Most serious people hope to have a positive effect on others in this life, and Walter Williams was no exception. In his case, he died leaving behind probably millions of people wiser and more secure having read what he had to say. He was a conservative Black in an age of suicidal Black loyalty to Leftism, the poisonous legacy of the Democratic Party/Great Society mass buyoff of American slavery’s descendants newly liberated by the Civil Rights Act of 1964.

To quote quintessentially cynical politician LBJ selling Civil Rights to other still-influential Jim Crow Democrats of the time: “I’ll have those niggers voting Democratic for the next 200 years.” If anyone doubts the veracity of this quote, try listening to recorded private phone conversations of LBJ on YouTube to get the full flavor of his graphic Old South vocabulary and fundamental attitudes.

No one lived and understood better than Williams the damage this politicized “altruism” had and continues to have on millions of Americans, hooked by the Democratic Party and its community operatives and organizers on public dependency and paternalistic Big Government/Big Brother policies. In his excellent video, “Good Intentions,”  one memorable statement stands out: “We were winning the war on poverty in this country until shortly after Lyndon Johnson declared war on it.” 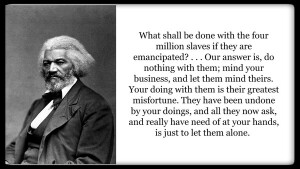 Now, 3 generations past the declared War On Poverty, we are reaping the full whirlwind of this deliberate exploitation of Blacks in service to perpetuating Democratic Party voting blocs in Black communities. No one stood athwart this deadly trend more forcefully than Walter Williams, and all Americans who subscribe to a philosophy of human dignity underpinned by the political & personal liberty of the individual are forever in his debt. His voice will be sorely missed in the ongoing, escalating battle for American freedom. Well done and thanks, Mr. Williams. R.I.P.