UPDATE 6/20/21: The absence of fathers and full understanding of their crucial role in a healthy family and society at large has never been more apparent. 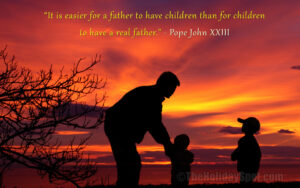 ORIGINAL POST 6/21/20: Observing a day honoring and taking full stock of fathers has never been more timely. The history of Father’s Day in America is one of persistence, an idea slow to come to fruition over nearly a century. The notion of a holiday devoted to American fathers first came to light early in the 20th century and only became official as recently as 1972.

Father’s Day, the third Sunday in June, was established as a tribute to the indispensable “man of the house,” a stalwart presence now sorely missing (both literally and figuratively) in too many American homes and in our social affairs. We are paying a dear price for that absence, everywhere: from the desolation of the Inner Cities to the toniest gated communities of Hollywood and all points in between on the economic spectrum.

Among the lethal consequences of that absence are the abandonment of the most basic moral standards and established mores; a rejection of life’s large duties and responsibilities; a growing, unopposed appeal for lawlessness pushed by the political Left; the resultant anarchy running amok in schools K-College lapping over into all social settings; the blurring/erasure of  boundaries, including what constitutes and differentiates male and female. If men and genuine manliness are villainized, what happens to the pivotal role of fatherhood in our society?

The fathers of us Baby Boomers (today’s senior citizens!) were expected to weather Great Depressions, World Wars and the challenges of providing us with lives of unprecedented advantage. Has our fortunate generation done as well? And what is expected for today’s fathers?

The challenges are different today but no less important. For our fathers, European and Asian fascism was a clear call to action. Flushing out and exterminating those present-day termites quietly, inexorably eating away at the foundations of society worldwide require no less than the bold assertion and guiding presence of maleness, father figures fighting for the lives of those depending upon them.  Is it any wonder we pin such high hopes on the brash,  fearless presence of Donald Trump?

Here’s to his unabashed American patriotism, his refusal to turn the other cheek, the pugilistic style, fighting to win! Our forefathers were precisely that, and our turbulent times urgently call for worthy successors, modern forefathers for Americans of the future!

9 Replies to “In Praise (and In Search) Of Fathers”