In response to cries & concerns about anti-Semitism from “the Right,” one must point out that a Leftist need look no further than his own political picnic grounds where Jew hatred and anti-Zionism has found a most welcoming home. Naturally, the rabble-rousing MSM and its blind following in the MSDemocratic Party paint it all as fantasized people in sheets, burning crosses and those oceans of waving swastikas we’ve all seen firsthand at those sinister Trump rallies. From these Triumph Of The Will scenarios are drawn all those people now shooting up synagogues. Or so says even-keeled Grey Lady scribe Michelle Goldberg.

Without looking much beyond the surface, one notes that the good guys are all Marxists, the bad guys their opponents in those bastions of fascism known as conservative America (Trump) and Israel(Netanyahu). Apparently, the only good Jew or good feminist or good gay or good “person of color” is a Marxist one.

Among the “good guys” on the Left are those  duly elected Marxist Muslim Democrats in Congress. Talk about intersectionality!  This new representative demographic of rising radical Islam in the Midwest appears to be making great strides in embedding itself  along with the predictable No-Go zones now becoming a matter of course in Europe’s major cities. But nothing to see here. One’s only concern must be the dark spectre of Trump and his fascistic minions.

“Hate has no home here?” we once again ask rhetorically. 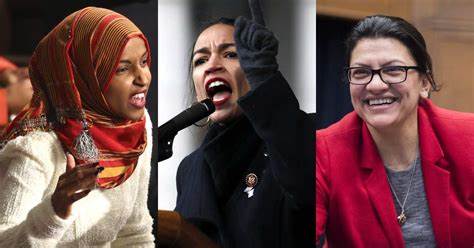 One Reply to “The Anti-Semitic Left: Hate most definitely has a home here…in the Democratic Party.”