UPDATE 1/3/21: Amy Coney Barrett going all Bill Barr? And the other 3 Bush/Trump “conservative” appointees as well? Not to mention the already suspect Roberts?    Have we been duped? 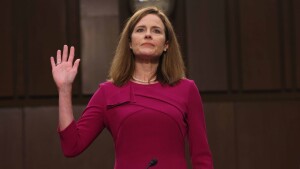 UPDATE 10/27/20: CONFIRMED! And now a 6-3 Conservative majority in the court (even despite the next time the Chief Justice goes predictably wobbly). It’s really Clarence Thomas’ court now, not Roberts’. At last a legal showdown on the big issues: ObamaCare and all its many attendant socialist tentacles; abortion no longer a frivolous convenience or amoral political statement; the Second Amendment as a statement of our most basic right to self-preservation; for that matter, the First Amendment, free speech under constant, severe attack of late from the American Left/Democratic Party that has gone headlong over the edge into Marxist-inspired violence and destruction. The original intentions of our Constitution now promise to be protected and carried out in practice and, with Trump’s re-election, the American horizon will look very bright indeed. 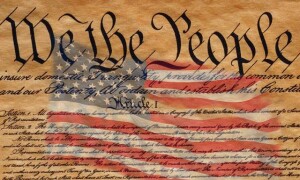 UPDATE 10/17/20: In the midst of the Congressional inquisition she faces, one can truly get to know her character and high level of genuine scholarship in this Hillsdale College speech, delivered May 21, 2019.

UPDATE 9/26/20: There are solid reasons to think this woman is a real Conservative’s choice for The Court. Based on her life and experience, she’s a good bet to handily withstand the vicious gauntlet she’s about to run.

UPDATE 9/19/20: Now that Ruth Bader Ginsburg has shuffled off her mortal coil, the way is clear for another woman on the Supreme Court, without delay. This would be great news, progress, social justice, totally “constitutional” in some quarters if the woman/ethnic/gender dysphoric nominee is a Leftist. Joe Biden(in 2016) would agree! Not surprisingly, opposition to a CONSERVATIVE woman on the court like Barrett will be met with predictably the same vicious character assassination and even all-out mayhem in the streets we’ve now come to expect from the Dem Left. Fasten your seatbelts.

ORIGINAL POST 1/13/19: Much to the frustrated, disbelieving horror of the Left, Ruth Bader Ginsburg is mortal, human, finite and due for retirement from the Supreme Court. That leads to the frustrated, disbelieving horror that someone younger and more Conservative might very possibly replace the ailing cheerleader-activist for international law and One World Government. As the role of Supreme Court Justice is clearly defined as INTERPRETATION of the UNITED STATES Constitution, it might be refreshing to appoint a new member of the Court who respects and reveres (not longs to rewrite/discard) what is perhaps the greatest single document ever drafted in service to human freedom.

That would be a welcome contrast to Prog icon Ginsburg on record grandly declaring inferior that hackneyed old thing drafted centuries ago back in Philadelphia by all those White slave owners; second rate as constitutions go. South Africa’s constitution, she has confidently opined, would be more her model for the new U.S. Constitution she’d love to write…that is, IF she (or anyone else) were in the business of re-writing the U.S. Constitution. Revamping the American blueprint is what the power-mad Master Planners, architects of American Transformation, multi-millionaire Marxists have in mind. They are not welcome here.

That said, we are bracing ourselves graciously, optimistically for the next bit of “Resistance” madness surely in store for us as a new Supreme Court Justice is nominated, vetted and confirmed. Amy Coney Barrett appears to be at the top of Trump’s short list based on her legal experience, competence, sterling character and, not incidentally, her ability to withstand what has already been a grueling attack on her personal beliefs and character by the usual Leftist inquisitors in earlier confirmation hearings.

Though somewhat prematurely, we bid an un-wistful farewell to RBG; and once she has outlived her usefulness as political propaganda, her grief-stricken fan base on the Left will swiftly move on to their next tantrum and accompanying shiny talisman of Marxian worship. What some people will do, over & over & over again, to avoid the agonies of freedom.

5 Replies to “Amy Coney Barrett: an attractive replacement for RBG”