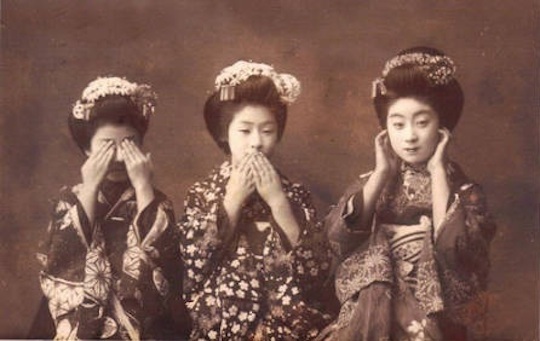 Elite Feminism’s reaction to Deplorable America! Hostage crisis! Bring back our girls! Although claiming like Big Sister Gloria they need a man like sushi needs a rickshaw, these 3 little handmaids from PC school are compelled to do the bidding of  their Big Sisters and moneyed male masters.

Forget about slaughtered C&W fans in Vegas or millions of Americans in truly desperate straits of one sort or the other. We’re informed that the real breaking news is a foul wind emanating from the growling bowels of Elite Feminism.

Blinking a frantic SOS with their jaded, greedy eyes, we are being treated to a heartrending  cry for help from female impersonators Hillary, Michelle-Antoinette, naaaaaaaasty woman Ashley Judd, litigating lady of the night Lisa Bloom, phony cold-fish-with-a-fleet-of-discarded-bicycles Gloria Steinem, brothel madam and Albanian cleaning lady Madeline Albright and a host of other handmaiden hostages letting loose with a howling hailstorm of dog whistles begging to be rescued from speaking with the One Voice of their Leftist masters. Said oppressor profile: White, male, pudgy, rich, greasy caveman carrying a big club and bulging wallet,  spouts feminist claptrap to cover for being a disgusting pig. Known to answer to names like “Teddy” or “Billy Bob.” Most recently responds to the expletive “Harvey.”

These unfortunate female robots preaching the Gospel of Gall are being forced to project their own mental enslavement and rigid totalitarian mindset onto free, reasonably happy women somehow misguided by their better natures and common sense into voting against Big Sister Hillary.  What torture we are witnessing watching these bitter, empty vessels tearing their hair out, begging, imploring their truly liberated sisters to join in their captivity.

As Donald would say, “Sad.”

Do we have a hostage crisis here? Self-important Ladies of the Left have apparently been coerced into telling ALL women (and the rest of the world) what to do and think and now find themselves looking like the ones who really need help! Like the panicked control freaks they are, they are finding it hard to adjust to a vast segment of the population not having the slightest speck of interest in being their obedient followers. Which leaves the execrable Hollywood & DC coven covered with the stink of their own rancid dye of lies, powerlust and corruption. And it isn’t washing out.

Michelle-Antoinette: Quote 1: “Any woman[individual BAD] who voted against Hillary Clinton voted against their [collective GOOD!] own voice;” Quote 2: [Trump’s grabby hands/naughty boy words] “have shaken me to my core.” Quote 3: “Harvey Weinstein is a wonderful human being.”

Hillary Clinton: Quote 1: Deploring female traitors who voted against her: “Women will have no empathy for you because they will be under tremendous pressure — and I’m talking principally about white women — they will be under tremendous pressure from fathers, and husbands, and boyfriends and male employers, not to vote for ‘the girl.'” Those @*$*%$#$ men! She should know. Quote 2: “Clinton says she believes a woman will one day be President but adds, ‘I just hope she’s someone I agree with, so I can support her!’” Pro-choice, voting or otherwise, only extends to special royalty like Herself.

Dem Party fatcat and Hollywood Hypocrite Harvey Weinstein, utterly convincing in expressing his desire to “so respect women,” suddenly is taking a leave of absence no doubt to “spend more time with his family.” Or somebody. This inspiring move is one commendable part of working toward “being a better man” and hoping to buy immunity for being a sexist pig, and herein, the first step on the road to redemption back: “I’m going to give the NRA my full attention. I hope Wayne LaPierre will enjoy his retirement party.” Anonymous sources reveal he will also be assisting recently liberated hero/martyr/feminist icon O.J. Simpson in his search for Nicole’s real killer. Any good, caring, compassionate person and abused women the world over must certainly recognize a friend and advocate when they see one.

Not surprisingly, Big Sisters Michelle/Hillary/Madeline/Gloria and all women who put Leftist/Elitist power and big money above any so-called loyalty to those sisters who stray from the Party line respond: “Grope away, Harvey, baby: we’ve got your back!!” Until it’s in their interests to be “Shocked! Shocked!”

Alas, behold these lost Big Gov and Hollywood handmaidens who have been brainwashed to believe that the only voice that matters is their own. As bubbles burst, cushions collapse and buffers from reality crumble, we will be faced with a major crisis of exploding heads and deflated egos. Are there enough grief counselors in the world to handle it?

3 Replies to “The Geisha Girls of Elite Feminism: A cry for help from the Dem Party’s most prominent HandMaidens.”