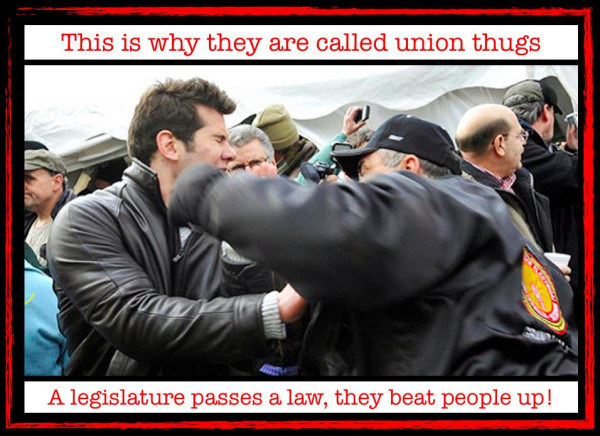 As union-ravaged Michigan moves bravely toward becoming a Right To Work state, we’re treated to union violence unleashed against any move allowing people to work outside the unions’ control.

Click here to donate to Right To Work advocates Americans For Prosperity.

This chilling specture is but a hint of what awaits anyone daring to refuse the questionable “protections” afforded by union membership. To those who still believe unions exist “for The Working Man,” think again. Quite the opposite. The unions today exist exclusively to provide power & wealth for the elite Labor Bigs (Trumka, Hoffa, Stern…) and crumbs for the millions who work when, if and where they are permitted to do so. For this grand privilege of being indentured slaves, union members are compelled to fork over a steady supply of protection money, benignly known as “dues.” A rather one-sided arrangement eerily similar to that between the Mafia and those it set out to “protect” in the good old days.

And so it goes with all forms of Marxism when allowed to follow its essential goal of destroying free enterprise and the millions of voluntary transactions that takes place among free individuals.  That includes the mutual agreement between the employed and the employee: I do this for you, you pay me that. Enter the big-hearted unions on behalf of “The Working Man,” and eventually everyone loses except the Union bosses and the politicians (their activist leftwing lapdog media in tow) with whom they collude.

Hitler had his own union thugs & Black Shirts, Stalin had his trusty NKVD/KGB; Obama has his unions, the media and a proposed civilian army. It can happen here, and it has nothing to do with Bible-thumping Christians, and everything to do with the Marxist dream of permanent class warfare.