FURTHER UPDATE: 6/20/12-They’re still talking about Estonia as a model for fiscal sanity and the attendant prosperity it provides.

UPDATE: 6/7/12- Little Estonia teaches the boundlessly smug Paul Krugman a basic lesson in Economics 101. How humiliating to see a whole country thriving by standing diametrically opposite everything Krugman proposes. “Now Paul, if you’re in a hole and you keep digging, it doesn’t get you out. It gets you in deeper.” How humiliating to find oneself looking like a silly nerd next to someone who actually does things in life, not just writes about them.

This writer, an anti-Soviet (armchair) Cold Warrior from age 21 on, recalls vividly the videos leaked out of the early Estonian concerts in the late 80s where everyone was singing forbidden patriotic songs at the outdoor amphitheatre in Tallinn at the risk of serious reprisals from their Soviet overlords.

I cried then, and I truly wept behind my dark glasses last week [May 25, 2012] standing there there beside Ernesaks’ statue… 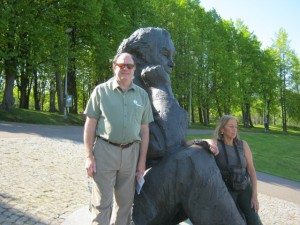 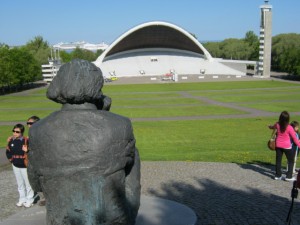 … looking out at the parabolic bandshell and the magnificent story that unfolded there decades ago.  What a story.

And now the satisfaction of seeing this  older-and-wiser European nation prosper in self-disciplined freedom while her profligate socialist neighbors flounder on the verge. Add to that the identical, inspiring message sent to America by the people of Wisconsin, and one is faced with a very special, hopeful day indeed. As God blessed the Estonians, He has blessed America yet again.

Here the American co-director of the feature documentary “The Singing Revolution” describes the film’s historical context.

One Reply to “Estonia: The Singing Revolution Goes On!”