UPDATE: June, 2012-Chen Guangcheng, now safely in the US with his wife & family, gives a press conference that is remarkably reticent regarding his Chinese tormentors. He is understandably concerned for the welfare of the friends & relatives left behind. Their fates are almost certain not to be as fortunate as Chen’s. Little has changed regarding freedom of speech and assembly in China. On the June 4th anniversary of Tianamen Square, people are arrested and simply disappear after merely making mention of it. Happily for Chen, the world attention focused on him forced the hand of the his Chinese overlords and the predictably spineless Obama administration, and he is free.

UPDATE: Original headline an unanswered question, now answered.  The “concerned” Human Rights activists leading our country are unmoved by the plight of a blind, hounded, civil rights activist seeking asylum…not to mention a whole nation of a billion oppressed humans seeking some sign that the West “Has Their Back.” Shameful doesn’t even begin to describe it. As Elian’s fate expresses the essential worthlessness of the Clintons, so Obama’s abandonment of Iranian and Chinese rebels exposes his cold-blooded cowardice and collaboration with our enemies.

May, 2012: A Chinese dissident seeking asylum for himself and his family in America is feeling the rug being pulled out from under him by our President and Secretary of State. The outcome isn’t a mystery to anyone who knows American Liberals and Socialists. “Human Rights” is one of the self-righteous  Left’s oft-repeated mantras invariably unaccompanied by even the slightest action that might benefit another human being in distress.

The last time a Democratic administration had the chance to stand up to a Communist regime and grant at least one of its citizens asylum, this happened: 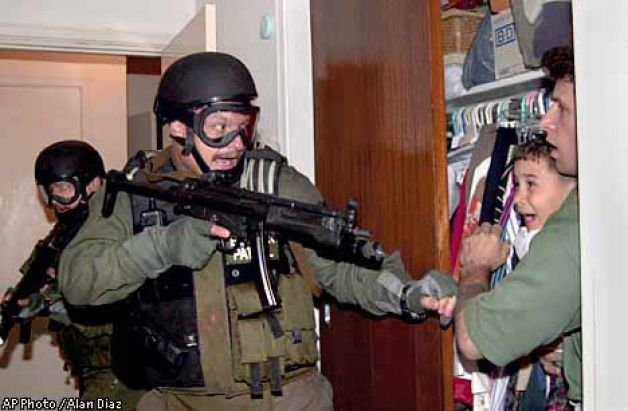 April, 2000: Bill Clinton and Janet Reno decided it was better that Elian be returned to his father in Cuba or, in political terms, that Cuban Tyrant-For-Life Fidel Castro mustn’t be upset. Naturally, his mother’s wishes did not carry the same weight. Recall that she deliberately carried Elian in a boat to freedom in Florida, dying in the process. A decade later, Elian is the perfectly brain-washed Young Communist who considers Fidel his father. Congratulations, Bill & Janet, Hillary and Barack, and to all those American Liberals/Socialists who don’t think communism is so bad. Hey, maybe It’s A Good Thing.

Another take on the selective concern American Leftists have for “Human Rights.”  In this case, this is about an adamantly pro-life activist in Red China opposing abortion and forced sterilization. Not surprisingly, empty platitudes and deafening silence from our unconcerned Secretary of State and President.