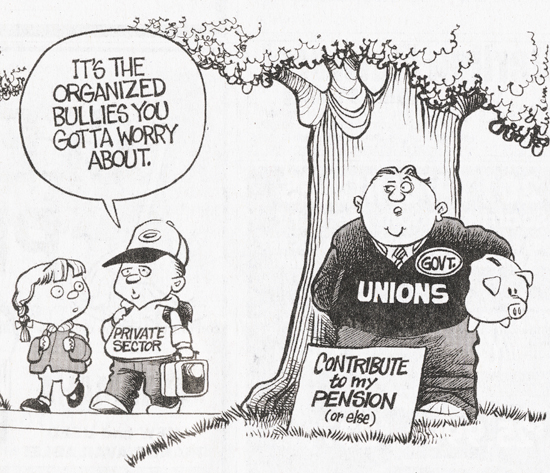 “We’re only here to help you.” Not your friendly government bureaucrat knocking at the door this time. In the name of protecting the “Little Guy,” unions have become the Big Guys who tyrannize & squash Little Guys. The deal: we “protect” you, we own you. And who’s that in bed doing the Crony Capitalist cha-cha with the original Bad Guys, Big Management? Surprise! And who’s that busting heads on behalf of certain political leaders with a Big Government/Socialist bent? Surprise! Surprise!

Read about “Mr. 1%” Jimmy Hoffa and his lowly 99% union members at Big Government. Tax the rich by all means but no lower union dues for the plebes. Think Mafia. Think Russian Commissars. Some animals are more equal than others.

More about Unions and their central role in creating a Socialist America.

One Reply to “The Union Myth of Representing ‘Working People’”